With simple means, demagnetization can be integrated into a stationary environment with a conveyor belt. If a workpiece on the belt is slowly moved over a degaussing device, a better effect can be achieved than when moving the device over a lying part.

For an optimal demagnetizing effect, the conveyor belt should be set up in the transport direction in the east-west or west-east direction in order to avoid any influence of the earth's magnetic field on the demagnetization. The upper demagnetizing flat coil has a height adjustment to adapt to different part geometries.

List-Magnetik supplies these and other individual demagnetization systems from a single source: We can manufacture and connect the electrotechnical installation, mechanical components and control technology. Our measurement technology is used to measure the success of the system.

Portable Demagnetizing Devices HE-10 HE-20 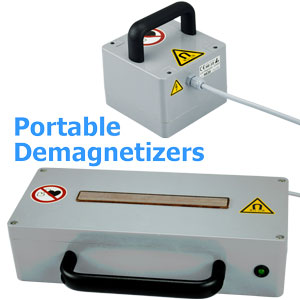